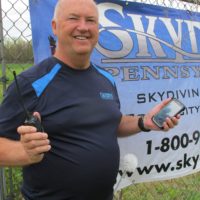 Cecil Smith took to the skies for the first time on a brisk November day in 1974. There were three distinct things that made Cecil fall in love with the sport right after his first jump: the speed of freefall, the quietness of canopy descent, and the community of skydivers!

Before Cecil found skydiving, he was going to school, but wasn’t sure what direction he wanted to go. Outside of school, Cecil enjoyed his first true passion, baseball! “I was pitching for the local team. I pitched my last game when I was 26, but I still love the sport!”

Having been a skydiver in Pittsburgh, he witnessed the community grow and evolve over the years. In the early 90s, Pittsburgh had more jumpers than one skydiving center could handle at the time, so Jeff and Roger Reckard opened Skydive Pennsylvania in 1993. Cecil had a good relationship with the duo as they were former students of his. In 2009, Cecil was given the opportunity of a lifetime – the chance to purchase the Skydive PA from the Reckards. He seized the opportunity and hasn’t looked back since!

“One of my favorite things about the sport is seeing the faces and hearing the comments from those who just made their first skydives,” Cecil explains. ‘My drive in the sport is to help new skydivers progress safely, and I want to be the one who gives them their “A-License” stamp on their forehead!”

Cecil’s passion for the sport and his business are ever-present. He’s often found shuttling people around, talking down students, and answering the phones. Even his children have begun walking in his footsteps helping out with the operation. “We want to share skydiving with as many people as possible, keeping safety in high regards, and maintain the family vibe.”

A well run organization and I would recommend them to anyone wanting to dive!